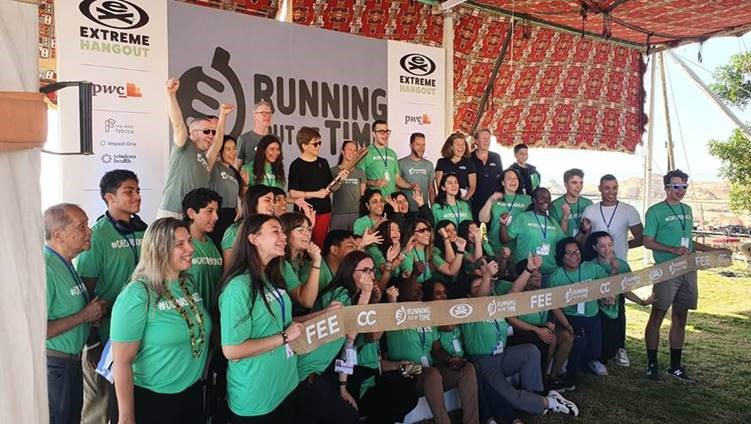 The First Minister of Scotland Nicola Sturgeon this morning attended the finish line of the Running Out Of Time climate relay which has been working its way across land and sea, from Glasgow, for 40 days through 18 countries to reach COP27 in Sharm El-Sheikh at the launch of The Extreme Hangout at COP27; a dynamic youth climate action hub, perched in Bedouin tents overlooking the Red Sea, which is set to host speaker events and film screenings over the next 4 days, giving young people a place to join the climate conversation and have their voices heard.

“I want to congratulate all the participants in this world-first relay and welcome the baton as it completes its journey across 18 countries, from Glasgow to Egypt. Their message is clear: climate change is already having a massive impact around the world and if we don’t take the right action, things will only get worse.

“The hugely inspiring efforts of everyone who took part show why youth action is so important. Not only have children and young people played a significant role in keeping climate change at the top of the global agenda, but they will also face the greatest impacts of climate change over their lifetimes.

“It is only right that we listen to the voices of the next generation, and that we hear them when they challenge us to do more to tackle the climate emergency.

“The Glasgow Climate Pact was an important agreement, which included strengthened efforts to build resilience to climate change, curb greenhouse gas emissions and provide the necessary finance for both.

“Countries cannot row back on the commitments made in Glasgow. COP27 must put a renewed focus on the ongoing delivery of the commitments already made and seek agreement for more meaningful action.”

At 7,767km the Running Out of Time relay is the longest non-stop relay ever attempted. Over the past 40 days (30 September to 8 November) thousands of runners, cyclists and sailors have worked together to pass a relay baton through 18 countries from COP26 host city Glasgow, Scotland to Sharm El-Sheikh, Egypt in the name of climate action and in support of principal partners Foundation for Environmental Education (FEE) and Carbon Copy.

Inside the baton is a message written in English and Arabic crafted by young people and supported by over 800,000 signatures, to the decision makers at COP27 calling for quality climate education to equip people of all ages and in all places with the skills, knowledge and opportunities to build sustainable, climate resilient communities.

The iconic relay baton was created by award-winning Glasgow-based designers 4c Design. It utilises 18 seemingly fragile parts representing the nations the baton passes through that are stronger together where the exchange of the baton happens. The iconic spiral rings represent the four essential layers of climate action where impact can be made: international, national, local and individual.

Jamie Hay Running Out of Time Co-Founder “What an extraordinary journey to COP27 it has been! We said we would do this and today, as we crossed the finish line, we proved it was possible. We have passed this baton mile after mile, day and night, for 40 days. Thanks to the incredible collective effort of thousands of people, across 18 countries, we have covered the 7,767km from Glasgow to Sharm El-Sheikh. We’ve run, cycled, rowed, sailed, windsurfed and skied our way here. Through thunderstorms, hail, wind, snow, and desert heat. We never gave up. We kept moving forward. We kept working together. We’ve seen first-hand the endless human determination to show up and carry the baton for a cause we all believe in. We turned our words into action and I hope this baton, this symbol of hope, will be a reminder to world leaders that they must do the same.”

The finish line is being hosted by The Extreme Hangout at COP27, a platform giving young people a place to join the climate conversation and collaborate on solutions to drive climate action. Following on from the inaugural Extreme Hangout at COP26 in Glasgow which featured 200 speakers, 5000 visitors, 500k live stream views and 5 million video impressions, The Extreme Hangout is back, this time in a Bedouin tent overlooking the Red Sea. The live speaker panel sessions and film screenings are free to attend and open to everyone and will be livestreamed online over 4 days from Nov 8 to 11. The hangout will host debate, cross generational conversation and inspiring discussion from key opinion leaders, youth climate activists, politicians, Prime Ministers and environmental commentators, all on a joint mission to amplify the game-changing research and ideas helping to tackle climate change.

Amber Nuttall, founder of the Extreme Hangout, says “It’s the global youth who will ultimately suffer the most from a lack of action around climate change. The Extreme Hangout gives them a seat at the table. It’s a place where both young and underrepresented people can express opinions, share ideas, collaborate on solutions with decision makers while informing and inspiring a global audience through a live stream that amplifies their voices and holds leaders to account. We are not going to get out of this mess by the same thinking that got us into it.”

The general public are invited to sign their name on the baton message to help deliver it with so much support it’s impossible to ignore – https://running-out-of-time.com/message/

The Extreme Hangout runs from Nov 8th to 11th at COP27